A real treat today - as I was writing an e-mail I spotted a starling-sized bird with a crest in the sycamore tree. I instantly knew it was a waxwing. It swooped down out of view and I later realised there's a shrub full of rose-hips where it must have been feeding! What an awesome garden tick! Combined with a male brambling yesterday and all five species of winter thrush this week I'm not doing too badly!

While at the recycling place at Avonmouth there were hundreds of black-headed gulls, herring gulls and the odd lesser black-backed gull flocking around the waste warehouses! No doubt cashing in on good grub being delivered throughout the day. Along the road pied wagtails and dunnocks were feeding in the slush - no doubt goodies coming off the rubbish trucks' tyres!

On my way home I spotted some starling-like birds and could see they were waxwings too - just a few, but waxwings nonetheless! And once at home some black-headed gulls and herring gulls were flying low over the neighbourhood on their way to roost.

Everywhere you look there really is something to see - I'm going to miss it all while I'm a away for a few days for Christmas! Have a trusty neighbour to feed the garden birds for me though!
Posted by Ed Drewitt at 08:13 No comments:

After a morning resting fighting off a cold I set off for work - it still hadn't risen above minus 4.5 degrees Celsius.

The garden had been busy this morning - I threw out the leftovers of a chicken carcass and attracted a dozen black-headed gulls, a few herring gulls and....a rarity in Bristol, a common gull. Despite being common in urban areas in the south-east they stick to the hills in the west.

I went to work via Avonmouth hoping to spot some waxwings that had been seen yesterday. I wasn't disappointed - 7 were resting and feeding on some snow covered berries and I got some lovely views. A few fieldfares were having their share too. The odd lapwing flew overhead. 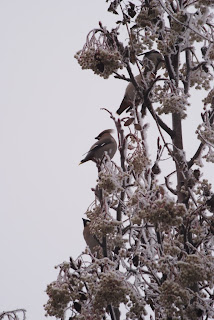 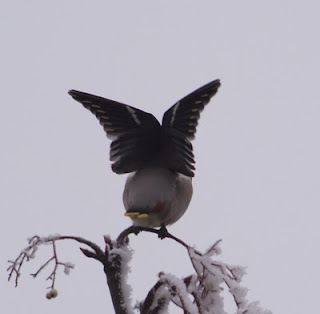 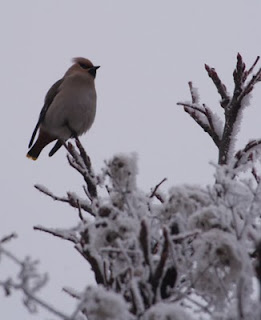 The trees everywhere were covered in harsh frost and even snow around Avonmouth. The Downs in Bristol looked stunning.

To help get us all in the Christmas spirit we had a carol service in the Great Hall of the Wills Memorial Building at lunch time - wonderful. And then battling in a freezing cold office I left a little early to continue getting over my cold and reminisce on the waxwings!
Posted by Ed Drewitt at 10:01 No comments:

Wow! Seems a long time since I last made a post. It's been a busy three months with the Bristol Dinosaur Project, leading bird identification courses and various appearances on tv and local radio!
Despite the big freeze across the UK we seemed to have come off pretty lightly in Bristol receiving only a light dusting. It's still incredibly cold outside though, not rising much above freezing. I've been putting some apples out in the garden which have been welcomed by the blackbirds. I spotted a male blackcap today too, a visitor from Germany while a mistle thrush was cocking its tail and getting a good view of the neighbourhood on top of the sycamore tree outside my flat. Yesterday I spotted 30 lapwings flying south across Henbury, no doubt escaping the snow further north. Be interesting to see how the next few days pan out - it should be getting a little warmer.
Posted by Ed Drewitt at 08:35 1 comment:

Ed Drewitt
Ed is a freelance naturalist and broadcaster, engaging people with the natural world. He has an energetic passion for nature and enjoys communicating to a wide range of audiences. Ed has been studying urban peregrines for the past 15 years, with a book coming out in the spring. Ed specialises in helping others learn birdsong, identify wildlife, ring birds, and take part in bird surveys.