Wow - what a week! Wednesday evening I was a guest at the Bath RSPB group's 40th birthday. Around 700 people turned up to listen to Chris Packham and Peter Holden. Was a brilliant evening and had the chance to mingle and chat with everyone including most of my old colleagues from the RSPB's south west office. Chris was on top form and did a great presentation of some of his, and his daughter's photos. Thursday evening I was talking myself at the Somerset Ornithological Society's meeting about peregrines and Friday went to meet my mum in Bath and had dinner in Jamie's Italian - very nice too!! Been a mixture of relaxing and working over the weekend - yesterday I was testing some sound recording equipment at Bristol Zoo Gardens with friend Nadege for BBC Wildlife magazine. Great place for animal sounds and the black-faced lovebirds and red-ruffed lemurs didn't disappoint! Today has been a mixture of birding and relaxing with Mike Dilger on the Severn Estuary with highlights including kingfisher, jack snipe, snipe and wigeon!! All just ten minutes from my home - perfect!!
Posted by Ed Drewitt at 07:43 No comments:

Didn't have to go far to work this morning - just up the road to Blaise Castle House Museum for a meeting about next year's Bioblitz which will be held at Blaise estate. After discussing some logistics and a look around the grounds I was back to the City Museum to work through e-mails and discuss some things with colleagues. The wind is ever persistent outside - I wonder if it'll ever ease off!! 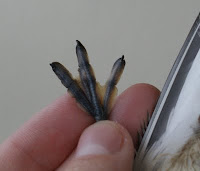 Submitted details of the grey phalarope to the Brecon bird recorder today with help from Hannah Rose who found the bird. Here's a photo of its foot - they have unusual, lobed feet typical of phalaropes and similar to those of coots!!
Posted by Ed Drewitt at 11:39 No comments:

Well, the grey phalarope made it through the night - phew!! Very relieved.
I fed it some more mealworms before hurrying out to film the results parts of the colour-ringing robin project I had been involved with for the BBC One Show. This went well with some nice results (to be aired before X-mas). I got home to find the grey phalarope, a female, had been pottering around and seemed quite bright and lively. I fed it some more mealworms and hoped it would keep going from strength to strength. Sadly, however, when I got home at the end of the day the phalarope was sat huddled, closing its eyes. Never a good sign. It was weak and although I managed to feed the delicate bird, it wasn't responding well. An hour later it had died. Examining it in more detail the bird was incredibly thin and too far gone to save.
Posted by Ed Drewitt at 08:48 No comments:

Labels: BBC One Show, grey phalarope, Mike Dilger, Robins
What a busy week it's been!! Had a great evening out with friends at the Living Room on Thursday evening - lovely chance to just chill and relax. Friday was awesome - had 50 minutes in the pool scuba diving with buddy Dan and instructor Elena. Despite the torrential downpours and strong winds in Bristol (and the UK) on the weekend, I still managed to lead a walk looking for short-eared owls at Aust, Severn Estuary. No luck with the owls (not surprisingly) but a kestrel and some curlews. Sunday I was leading a bird identification course at Folly Farm in the Chew Valley - great place to showing people birds. Highlight was a marsh tit. Half way through I got a text from friend Hannah asking what a bird was (in a photo). Incredibly, it was a grey phalarope!! She almost ran it over in the road. That evening I picked it up from her and managed to feed it some mealworms. It was very thin and exhausted but hoped it would survive the night.
Posted by Ed Drewitt at 08:42 No comments:

A quiet night last night - mainly sorting out the Bristol Ornithological Society's website and preparing for a presentation I am doing next week in Plymouth on raptor migration. Then chilled and watched a bit of tv!

Nice drive in this morning - a few mistle thrushes in Clifton at the top of some lime trees and a squirrel that couldn't quite decide what side of the road it wanted to be on - fortunately it made the right and safe decision!

Just heard from a journalist at Bristol magazine wanting to do an interview about the Avon Gorge peregrines - it's coming up to their 20th anniversary of nesting the Gorge which is remarkable!!
Posted by Ed Drewitt at 01:34 No comments:

Ah, the delights of bird song. Heard the evocative song of a mistle thrush this morning reaching out across Clifton. Perhaps not as melodic as song thrush or blackbird but still very wonderful on an overcast November day.

Chaired a great presentation last night by Ian McGuire (www.wildowl.co.uk) for the bird section of the Bristol Naturalists Society - brilliant stories and images of birds of prey on the Isle of Mull. Especially good photos of short-eared owls.

Hoping there are some short-eared owls at Aust in the next few weeks - leading a walk up there to see them but I think this mild weather has meant they haven't all migrated here yet!! There's been the odd one though seen! Ever optimistic.

Quiet day at work - catching up on e-mails! Preparing a talk tonight on the migration of raptors for the Plymouth RSPB group next week - should be a nice adventure down.
Posted by Ed Drewitt at 04:43 No comments:

news on the origin of the Swedish peregrine

A grey day in Bristol so far but enlightened by the presence of a fab cormorant drying his/her wings down by the Floating Harbour. Impressed today that Bristol City Council have put forward a reward of £500 to catch the people who dumped a household's worth of furniture by the Portway. Be interesting to see if someone comes forward.

Some feedback so far on the young peregrine found in Somerset. It was ringed as a nestling female on the 8th June 2009 at Arvika, Varmland, southern Sweden. She was one of four at the nest. I wonder how

many other peregrines here this winter are actually from Scandinavia!!


Swedish-registered ring (you can just make out the name Stockholm as part of the return address) placed on the bird's leg in June this year.
Rupert Griffiths, RSPCA, Westhatch
Posted by Ed Drewitt at 03:41 No comments:

Yesterday was a rather chilly day here in Bristol but a nice feeling as winter approches. Heard today from the RSPCA that a peregrine brought in over the weekend was wearing rings that showed it had flown here all the way from Sweden!! Remarkable!! The Swedes have a detailed colour-ringing programme so we should be able to find out lots about this young bird which was ringed as a c

hick this year. Sadly it had an infected broken leg and had to be put to sleep. However, I like to think that despite this it has still contributed to science and that its flight here hasn't been in vain! I wonder if any of my colour-ringed robins will make any long journeys south this winter!?

A quiet day today! Just relaxed at home and then went to the Bath Spa with friends this afternoon to enjoy some steam, heat opportunity to chill out!! No sign of the peregrines on the church which can be seen form the roof pool.

Two mistle thrushes outside flat this morning - they seem to come and go, always nice to see them when they're around. The misteltoe is looking good this year on the lime tree outside so will no doubt will be a good winter food supply for the thrushes.
Posted by Ed Drewitt at 11:15 No comments:

Wahey!! Two more robins colour-ringed this morning which brings the total to six - enough to present on a flyer to the local neighbourhood and to get them watching out for robins!! There were more to catch but some were just not taking the lure!!

The last few days have been very eventful and fun. Yesterday was the second round of robin colour-ringing - although sadly we didn't catch any robins!! We did however catch three wrens in the same area of one garden - all young birds hatched earlier in the year. After a few hours of trying before work, I quickly got to Clifton and grabbed the next bus (after watching two zip past me before I could get to the stop) and arrived on the platform at Bristol Temple Meads just as the guard locked the doors of my train!! I just missed it and waited another hour at Bristol before the next train - although I did enjoy a nice cuppa in the cafe on platform 12 and took a few notes prior to my meeting in Exeter. Had a lovely train trip to and from the city, meeting went well and enjoyed a snooze on the journey back - not before spotting a pair of shoveler ducks on the flooded fields with the swans just outside of Exeter. Plenty of redwings flying out of the trees and over fields too. Looking forward to some more robin ringing tomorrow morning - fingers crossed we catch at least another 2!
Posted by Ed Drewitt at 09:47 No comments:

Colour-ringing robins for the BBC One Show

What an amazing morning!! After a late evening getting back from scuba diving training, it was an early start today to be on site in Westbury on Trym, Bristol, to catch and colour-ring robins for the BBC One Show and help promote the British Trust for Ornithology. While everyone was getting ready with the filming gear I was getting traps set and mist nets up with one of the researchers Sophie. It was a slow start and by 8am we still hadn't caught anything. Then, one robin went into a net in a garden followed by some great tits, a coal tit and a dunnock. The robin was successfully colour-ringed and filmed, with friend and presenter Mike Dilger. It was then released, ready for studying who's who in robin world of this neighbourhood. We then moved to another garden where a robin quickly became interested in robin song (we were playing) and a decoy, stuffed robin we had next to the CD player. The robin was right by the net, feeding under cover. In the end the decoy and some mealworms were just too tempting and the robin made a dash straight into the net. Robin number 2 was successfully colour-ringed and released. Before midday we caught another two robins which was brilliant, four robins in total - we return on Wednesday and Friday to catch some more. Eight colour-ringed individuals would be ideal for the neighbours to look out for and to build up a picture of what territories are where.
Posted by Ed Drewitt at 11:36 No comments:

Ed Drewitt
Ed is a freelance naturalist and broadcaster, engaging people with the natural world. He has an energetic passion for nature and enjoys communicating to a wide range of audiences. Ed has been studying urban peregrines for the past 15 years, with a book coming out in the spring. Ed specialises in helping others learn birdsong, identify wildlife, ring birds, and take part in bird surveys.